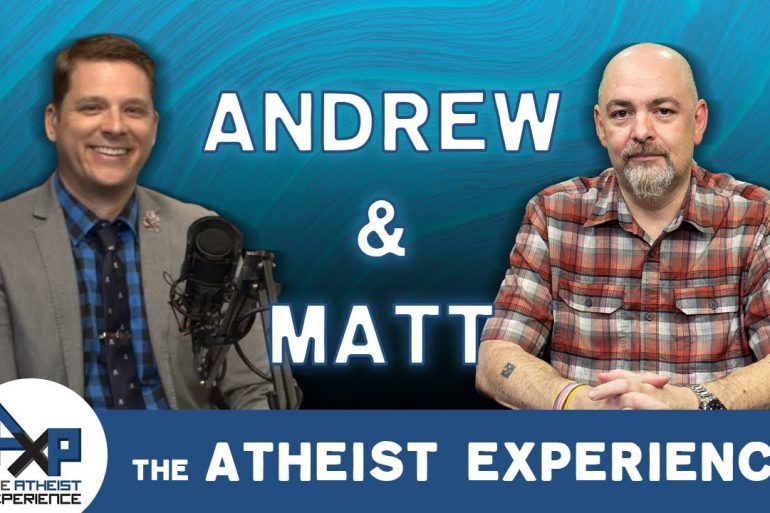 With operations out of Austin, Texas, The Atheist Experience is a live, televised American webcast that airs weekly. The discussions revolve around beliefs in God’s existence and promote input from atheists and theists who listen in on the webcast. The goal of the webcast is to make theists rethink their beliefs.

To promote this goal, the webcast prioritizes calls from theists. In most instances, the hosts usually ask these callers to give a thorough explanation of their religious faith. For listeners and viewers who miss the live webcast, each episode is made available in podcast format, and on YouTube.

The Atheist Community of Austin (ACA) is the non-profit organization behind The Atheist Experience. The goal of the community is to promote the separation of church and state and positive atheism.

The formation of an atheist group in Austin was the result of efforts by Kellen Von Houser in April 1996. Through e-mails to local atheists in the community, informal gatherings were held until the community’s formal founding on December 15, 1996.

At this point, the community had about 60 members and begun connecting to other atheists through its website in June 1997. On October 19, 1997, the pre-recorded pilot (recorded in Furr’s Cafeteria) of The Atheist Experience was aired.

Subsequent episodes were broadcast live to encourage callers on the show. To reach out to more people, Internet streaming was introduced in December 1999, while podcasts were made available in November 2005.

As pf December 2019, the official YouTube channel has over 98 million views and 306,000 subscribers. For 18 years, the public-access television studio at Austin Public was used in recording several episodes of the show. This location was later changed in October 2015, to the ACA’s Freethought Library.

Other shows such as the Talk Heathen, Preaching Humanist, Non-Prophets Radio, Godless Bitches, and recent addition, Secular Sexuality, are all spin-off productions by the ACA.

In May 2018, Patreon was adopted as a means for funding the Atheist Experience. The Atheist Community of Austin co-finances the show through donations to its general fund.

Having a debate or holding a conversation on topics relating to religion and the existence of gods is the original purpose of The Atheist Experience. Interactions are between atheist hosts and co-hosts and theist callers.

The debates are usually confrontational, despite the show being designed to attract theist audiences. The show’s approach is to let theists listen to the beliefs of atheists, from atheists themselves.

Copyright issues have come up over the years regarding the opening themes for The Atheist Experience. “Listen to Reason” by Bryan Steeksma was the theme song from August 2009 – August 2015, while “Saved” by Shelly Segal was used after.

The main emphasis of the show is on Christianity. This is due to the large population of Christians present in the United States and their societal and political influence. Nevertheless, there are debates over topics within the theism and atheism views.

Some of the popular topics include the application of scientific methods, ethics, religious dogma, and morality.

The filming usually occurs with the host sitting on the right and the co-host on the left, behind a table. To begin the show, there is an opening sequence during which the theme song is played, followed by the introduction of a theme for discussion. The co-host usually does this introduction, and the theme can be a discussion on current events or specific topics.

The host is responsible for live calls after these, although it follows a process. This process involves the screening of callers by the crew before they are put in a waiting queue. If a caller gets into direct contact with the host and co-host, they can still be put on hold if there is a need to clarify specific points by the host.

Putting a caller on hold is done at the discretion of the host, and there is a control panel that makes this possible. Calls are open to both theists and atheists, but the crew does their best to ensure a balance between them.

In addition to putting a caller on hold, the host may decide to disconnect a caller. This is an option that is available to deal with callers that frustrate the discussion or become rude. Callers that fall into these categories often have negative stereotypical views about atheists.

Leaning towards misconceptions about science and atheism, they can become verbally abusive towards atheists or the hosts. Although there is a preference for respectful and friendly conversations, the hosts may also choose to mock or verbally abuse the religious belief of these callers.

According to author, Yuriy Nikshych, The Atheist Experience is an “invaluable resource” and worth watching to help you get a better idea of how to interact with theists. He also stated that it could be an excellent tool for anyone on the path to becoming an atheist and losing their religious beliefs.

“Raise your hands if The Atheist Experience and the debates I’ve done contributed to you being an atheist.”

For over twenty years, Matt Dillahunty was a Christian. Growing up as a fundamentalist Baptist, he currently works as a professional magician. For eight years, he served in the Navy before joining the video gaming industry after moving to Austin.

Before rejecting his theistic beliefs, he had the intention of attending seminary and going into the ministry. In March 2015, he appeared as a co-presenter of The Atheist Experience for the first time. He is also the co-founder of a counter-apologetics wiki, Iron Chariots.

Baker works in the computer supported cooperative work field as a computer scientist. His interest and focus lie in the study of the implications of Christianity as a meme complex in the area of memetics.

At a point in his life, he was also an officer in the Atheist Community of Austin as a secretary.