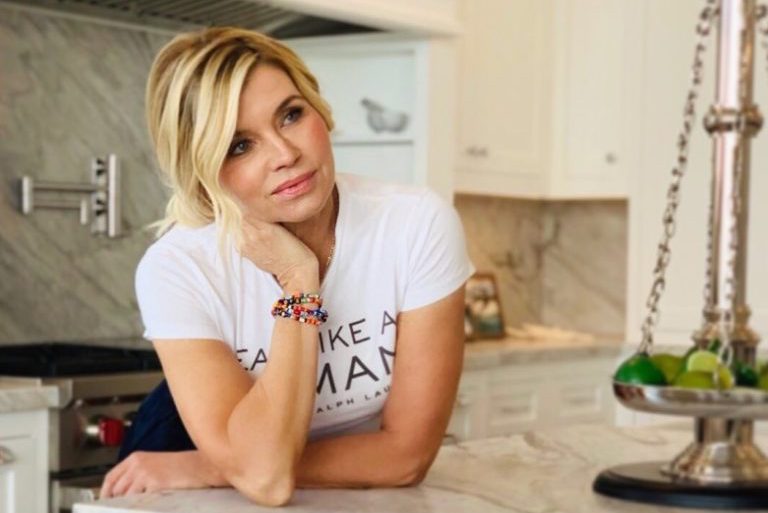 Nadine Caridi is a Brit and was born in England on the 6th of November, 1962. She, however, was raised in Bay Ridge, Brooklyn, New York City. Nadine might be a famous person but there are not lots of details about her family.

She has not shared any real point about her siblings and parents. This is because she has taken a decision to keep details about her family away from the public. This is obvious when you follow her on social media and watch her interviews on YouTube. In a lot of the interviews she has had, she has only shed light on her projects, businesses, and career. Although she was raised in New York, Nadine Caridi now lives in Hermosa Beach, California.

While still a teenager, Nadine was educated at John Dewey High School situated in Gravesend, New York. After getting out of high school, she became interested in modelling and fashion. This was basically because she was stylish and had a great body. With long blonde hair and deep blue eyes, Nadine is considered a gorgeous woman. However, beyond being beautiful, she is also very brilliant. She has a Master’s degree in Clinical Psychology.

Although Nadine no longer has the same appearance she did at the beginning of her career, she is still beautiful. She is blessed with a figure that is just apt for modelling. In addition to a beautiful body, she also has a beautiful face. Although she has aged considerably, she still has a stunning appearance. Her beautiful physique attracted lots of contracts from top firms such as Miller Coors.

In addition to taking part in the Miller Lite advertisement, Nadine also had different contracts with television stations. With lots of deals from highly-rated firms, Nadine soon gained national popularity.

While her fame brought her fortune, it did more than get her wealth. It also brought her a lot of influence, and she used this influence in the right way. She was an advocate for different health campaigns.

Nadine and Jordan Belfort’s relationship went on publicly even though he had Denise Lambardo as his wife. They attended several parties together. Jordan had powerful feelings for Nadine and decided to divorce Denise Lombardo his first wife. As soon as he officially got divorced in the court, he got formally married to Nadine Caridi. Their wedding held in the Caribbean and was an extravagant one. After the wedding, she replaced her surname with his.

Nadine Caridi gave birth to two children not so long after getting married. Her children are Chandler ad, Carter Belfort. Nadine’s children are now grown, and one of them already has a degree from New York University. Also, she is dating Connor Winter. At the moment, her son, Carter, is studying at Muhlenberg College and lives in Los Angeles, California.

Years after their wedding, they continued living a lavish lifestyle. Jordan went on to rebrand his yacht as proof of his love for Nadine. He changed the name from Coco Chanel to Nadine. After getting married, Nadine could no longer continue as a model. She became a full-time guardian. This, however, did not stop her from going on with her socialite life on the media.

Although their marriage was colored with a lot of glamor, it did not last a very long time. In the 14years that they were married, the marriage faced lots of troubles. Jordan got involved in lots of controversies with the law. One of them was taking part in fraudulent businesses. That’s not all. He was also involved in extra-marital affairs with a couple of women. His involvement in dirty businesses was deep, and Nadine had no choice but to get him to rehab. After being married for a long time, their marriage ended in 2005.

Not long after her divorce, Nadine got married to John Macaluso. Beyond just remarrying, she got married to a prominent man. Her current husband was the CEO of Wizard World. He is from New York and is an entrepreneur. There is a long age gap Nadine and her current husband, and this has been a source of concern for members of the public. Also, their marriage has produced one son. This seems quite perfect as John Macaluso already had three children from his previous marriage. His children are Allen Macaluso, Nicky Macaluso, and Frankie Macaluso.

How much is Nadine Caridi Worth?

Nadine Caridi is not one of the richest celebrities in the United States. Nonetheless, she has an impressive net worth. She is currently worth $5 million. She amassed this net worth from her successful modelling career and the movies she has taken part in.