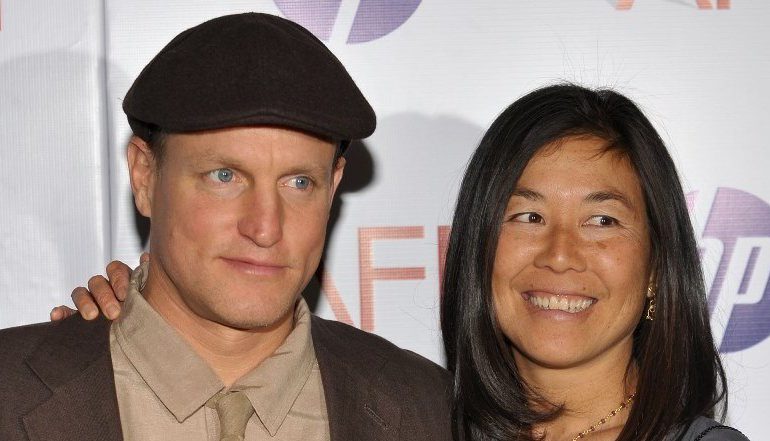 Most of you may have heard the popular proverb, “Behind every successful man there is a woman.” This popular saying has proved to be quite true for a number of men in the world. One of them is Woody Harrelson. His second wife, Laura Louie, proved to be lucky for him and the two have been together for many years now.

When it comes to Hollywood movies, you certainly cannot ignore Woody Harrelson. Born on July 23, 1961, Woody happens to be a popular American actor, and also a playwright. He has been awarded several awards during his acting career and has also been nominated numerous times. He has won a Primetime Emmy Award and has been nominated for four Golden Globe Awards and three Academy Awards.

Harrelson came into the limelight for his role of a bartender on NBC sitcom Cheers. He played the role of Woody Boyd which earned him his Primetime Emmy Award. He won in the Outstanding Supporting Actor in a Comedy Series category. When it comes to his nominations, he was nominated for three Academy Awards, best Supporting Actor for The Messenger (2009), Best Actor for The People vs. Larry Flynt (1996), and for Three Billboards Outside Ebbing, Missouri (2017).

Woody Harrelson was also nominated for a Primetime Emmy Award for Outstanding Lead Actor in a Drama Series. He played the role of Marty Hart in the first season of True Detective, a HBO crime anthology series.

Woody Harrelson, whose original name was Woodrow Tracy Harrelson, was born in Midland, Texas. His mother, Diane, was a secretary and his father, Charles Voyde Harrelson, was a convicted hitman. Woody had two more brothers, Brett and Jordan, who were raised in a Presbyterian household. Their father Charles was given a life sentence due to the killing of Federal Judge John H. Wood Jr. in 1979.

In 1973, Woody moved to his mother’s native place in Lebanon, Ohio. There he attended Lebanon High School and graduated from the school in 1979. He worked at Kings Island amusement park during the summer of that same year.

Laura Louie and Woody Harrelson got married in 2008. However, the couple’s love story goes back several years. They got married to each other exactly after 20 years of dating each other. The two have been married together for 12 years now. Laura is a co-founder of Yoganics, which is an organic food delivery service. She met Woody for the first time in 1987 when she was an entrepreneur. She used to work as his personal assistant.

The two soon got into a relationship that lasted for more than a decade before the two of them finally decided to make it official. Considering the fact that it is a celebrity couple, their wedding was deemed to be a near-perfect one. Both Woody and Laura live together today with their kids in Maui, Hawaii.

Woody’s secret to “long-term monogamy” is his loving wife Laura Louie. Even before Woody started to date Laura, he was widely popular as a playboy. However, thanks to Laura, that phase of his life soon became history. During an interview in 2017 with The Hollywood Reporter, Woody revealed that he was never a believer in weddings and in the marriage institution. This is probably the biggest reason why it took the couple so long to tie the knot together.

Woody revealed by saying, “I just never believed that it [marriage] made any sense, this long-term monogamy thing that humans do.” He soon started liking the concept of marriage stating that it was a cage of sorts and he related the necessity of remaining faithful to your spouse. He was quoted as saying, “Also, relationships do tend to get very proprietary. And so you end up, before you realize it, in a cage — maybe a very comfortable cage, but still a cage — and you can’t be the person you want.”

The star of “Now You See Me” explained later that all of that made him seemingly incapable of long-term relationships. However, he met his lovely wife Laura, with whom he fell in love when she used to work as his secretary. He was quoted as saying, “It was one of those things I wouldn’t admit to myself: I didn’t want to be attracted to my amazing assistant. But there was no connubial bliss.”

Laura and Woody Have Three Kids of Their Own

Woody and his wife Laura seem to be one of the perfect couples you will ever come across. Their family is completed by their three kids. They have three daughters, Zoe Giordano Harrelson, Deni Montana Harrelson, and Makani Ravello Harrelson. This makes Woody the only man in the house.

When it comes to celebrities and their weddings, they always seem to be under scrutiny of the public. Most of the time their marriages have to deal a terrible blow due to this same reason. Woody was no different from this rule. There are a sex scandal involving Woody that practically seemed to threaten his wedding life. This news hit the media in 2002.

The actor blamed the incident on taking one drink too many. He went on to say that it all happened since people like to take pictures with him. He went on to narrate the incident involving his harrowing experience when he got set up by three girls whom he met one night. One of the girls was a tabloid reporter.

Woody was quoted as saying, “I’m not sure how Laura found out, but she did. I was kind of hoping she wouldn’t see it. I can’t remember the details; I’ve doubtless repressed it. She never saw the thing. But someone told her.”

He was all praise for his wife Laura Louie and said that she is a compassionate woman due to her reaction to the sex scandal. He said, “Laura — this really gives you a sense of the depth of her compassion — what she said to me after finding out was, ‘That must be really hard for you, to have this shit exposed.’ She just said that.”

Woody’s first wife was Nancy Simon, who was the daughter of playwright Neil Simon. The two got married in 1985 in Tijuana. Unfortunately, the two could not get along with each other for long and the very next day the couple decided to part ways. The storefront marriage/divorce parlor was closed for when they reached it. Thus, the two had to remain married for another 10 minutes before they finally called it quits and divorced.

In 2001, Woody considered the “Voice Yourself” project as “a destination for many seeking sustainable living tips, as well as healthy diet advice and eco-friendly product recommendations.” This project is co-run by his second wife Laura Louie. Both are considered to be a constant presence on the site.

Woody got arrested in 1982 for disorderly conduct in Columbus, Ohio. He was found to be dancing in the middle of the street. Woody was also charged for resisting arrest after running away from the police. He finally paid a fine to avoid jail term.

Woody got arrested again on June 1, 1996 in Lee County, Kentucky. The reason for his arrest was him planting four hemp seeds in order to challenge the state law. The law did not distinguish between marijuana and industrial hemp. Woody arrived at the county with Louie B. Nunn, who was his lawyer and also a former Kentucky Governor. He was also accompanied by a CNN camera crew and an agent.

During his stay at a local hotel, Woody called the county sheriff over the phone to let him know of his intentions. The sheriff Junior Kilburn and his deputy, Danny Towsend arrived at the said location revealed by Woody himself. Woody planted the hemp seeds into the ground while the CNN camera was rolling after this was done, Kilburn arrested Woody for cultivating marijuana and took him to the county jail. He was bailed out for $200 the same day. Woody also signed several autographs and posed for photos with different deputies. Within just 25 minutes, Woody got acquitted of those charges with the help of Nunn.

Again in 2002, Woody got arrested in London after a taxi incident that ultimately ended up in a police chase. He was taken to the London police station and was also bailed out from there. Woody had to pay the taxi driver involved in the incident $844 before the case got dismissed. This incident also became the sole inspiration of his movie that got released in 2017, Lost in London. This movie was announced by Woody himself in 2016 and he claims that the movie contains just 30 cast members and is shot in 14 different locations. The film also has foot and car chase scenes and is said to be the directorial debut for Woody. Ken Kao of Waypoint Entertainment and Woody produced this film.